My trip to California

June 19, 2018
As I boarded my plane on a Saturday night after feeling pretty stressed about my SAT Subject Tests, I did not know what to expect for the next week as an Apple WWDC Scholar.

You see, I was surprised I was even accepted. I had barely known any Swift and there I was writing up a playground book to teach core APIs of iOS a couple days before the submissions were due. I guess the best things in life come when you intensely focus on something. For me, that something was figuring out Apple’s file structure for playground books, and then going through tens of Swift tutorials to put my submission together. In fact, I think that’s the best way to learn - learning by doing, which is what I try to spread at Enlight.

Anyways, let’s get back to the story. As I arrived in SFO, I was overjoyed at the fact that I was at the place - Silicon Valley, where it all began.

My cousin picked me up in his rental (I’m pretty sure most people in SV don't have a car, every other car I saw around there was equipped with Uber/Lyft stickers) and we began our drive down to San Jose.

Apple provided housing at SJSU, which to be honest, was quite nice for dorm rooms. My super accomplished roommate, Roland, was from Hungary, and it was fun to hear about his press meetings with different people for the apps he had developed. I realized that without Apple's platform, incredible developers like Roland would have not been able to shine. 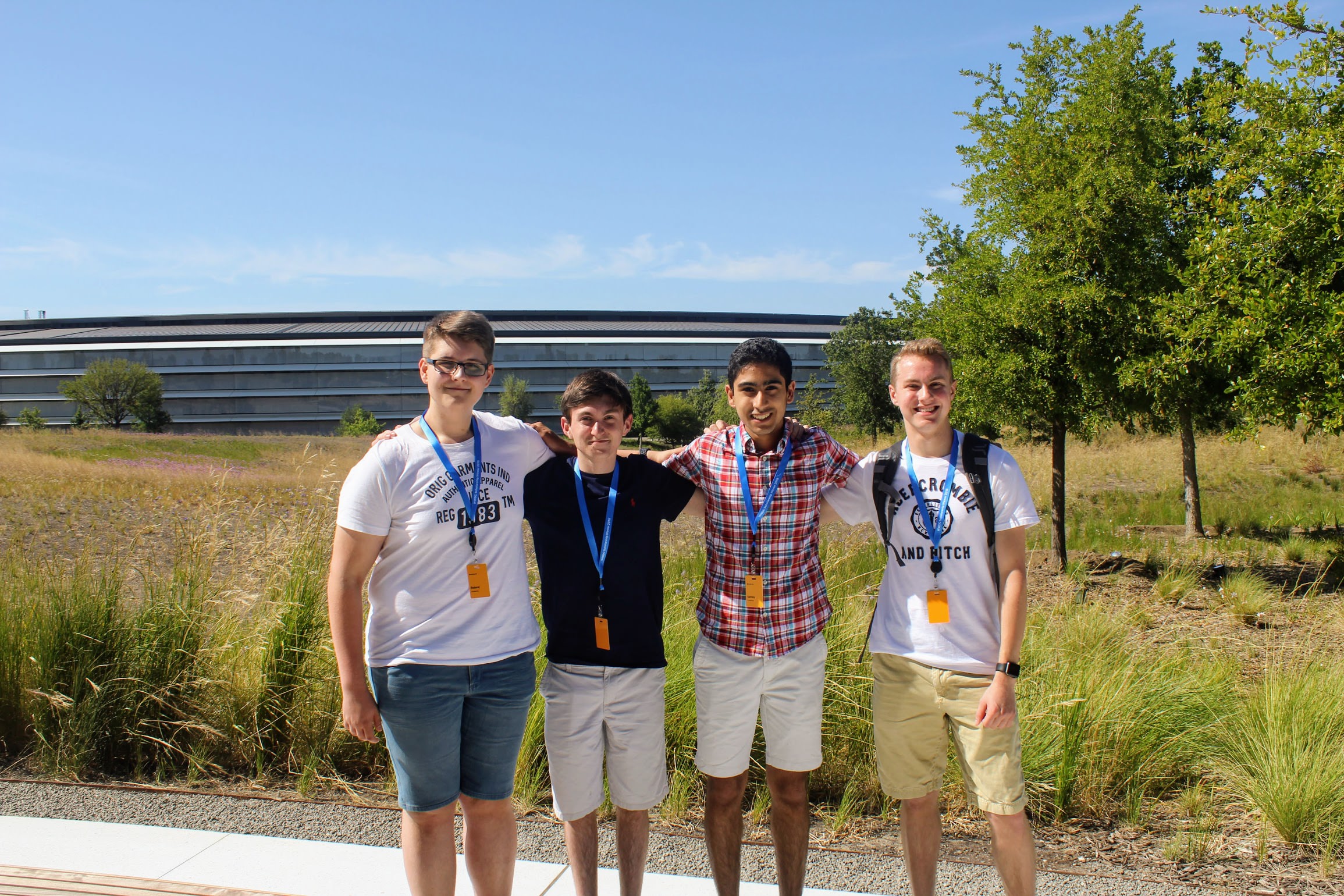 In addition, I think that the people I met were what made WWDC so amazing as all the scholars were so incredibly smart and self-motivated. This positive energy is what will define the our future, and I'm really looking forward to it. 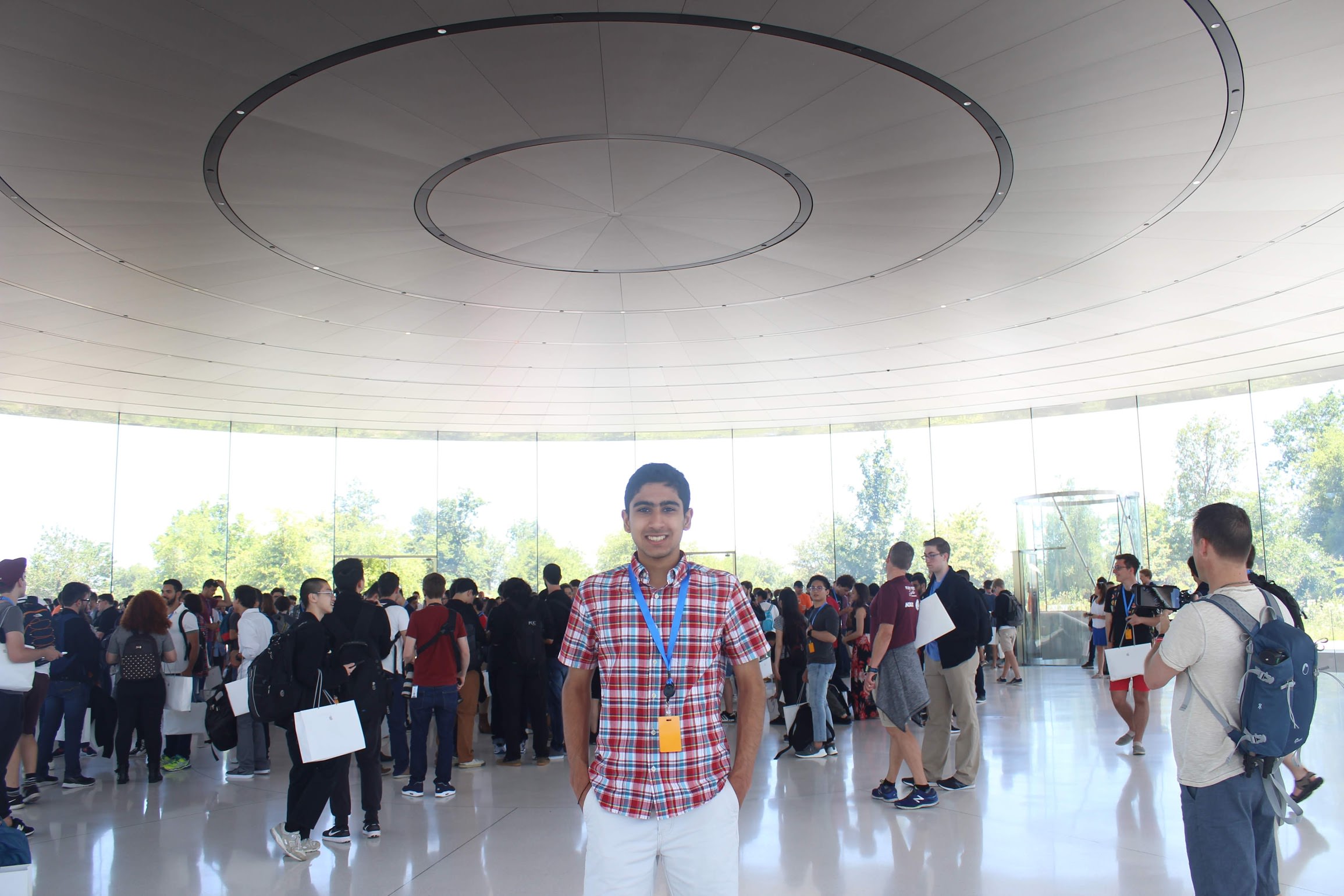 On Sunday, we went to Apple Park for orientation. As I entered the famous, all-glass Steve Jobs Theater, I felt as if I didn’t deserve to be there. After hearing a couple speakers, including Tim Cook, we had a chance to speak with Apple engineers and attempt to take a selfie with Tim. Roland did get Tim's autograph though, which was pretty cool. 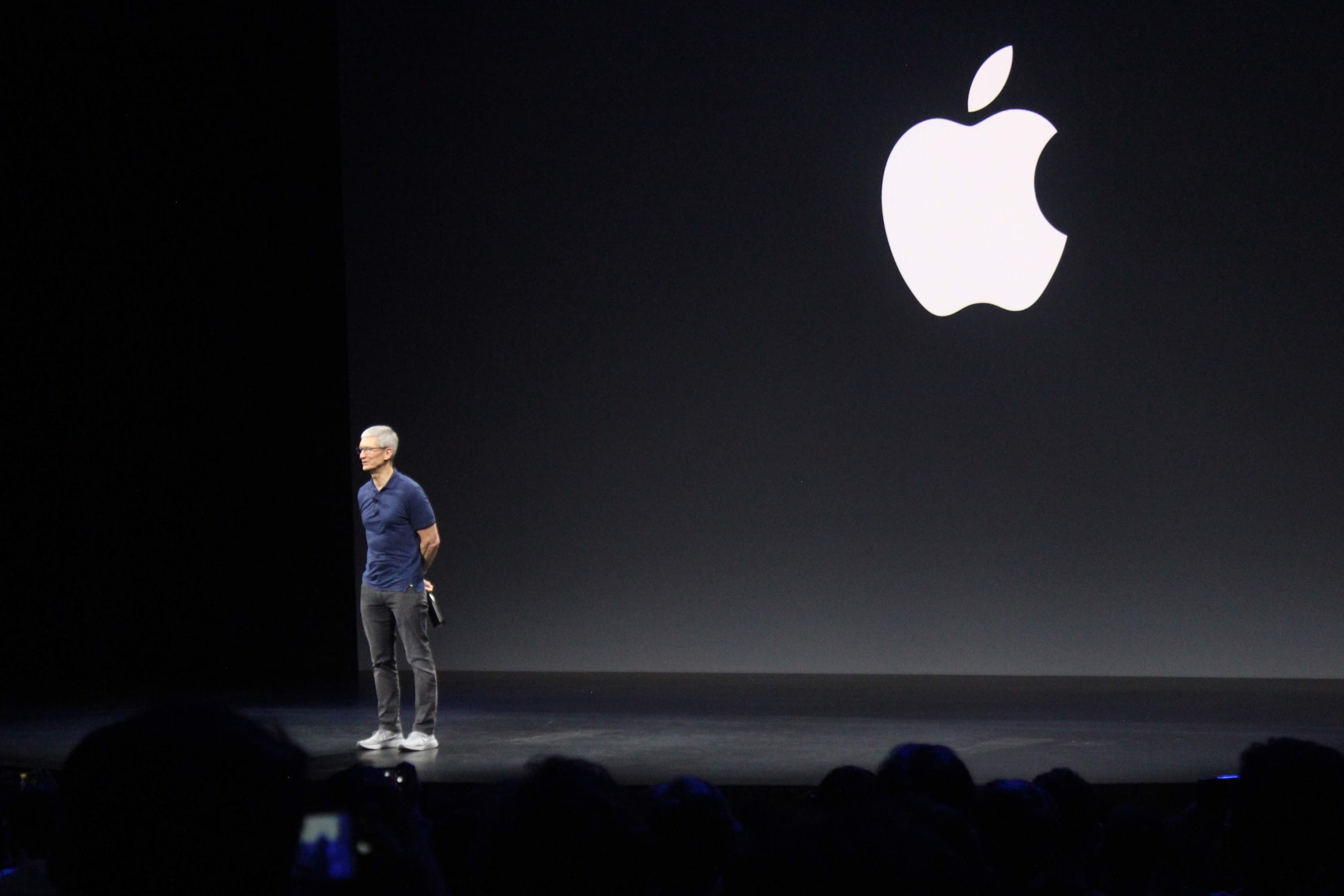 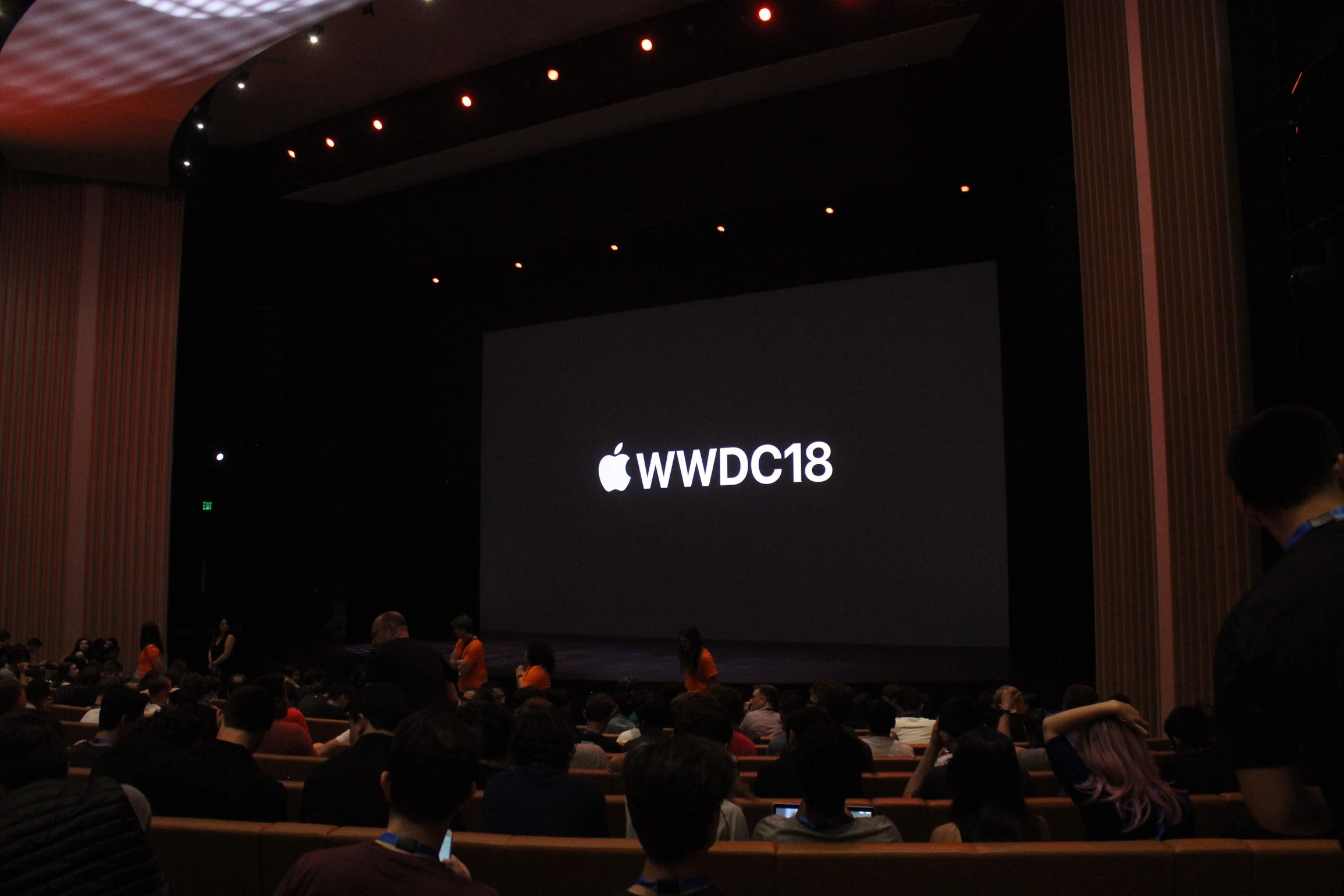 By the way, I was told that each seat inside the Steve Jobs Theater costed $14,000. 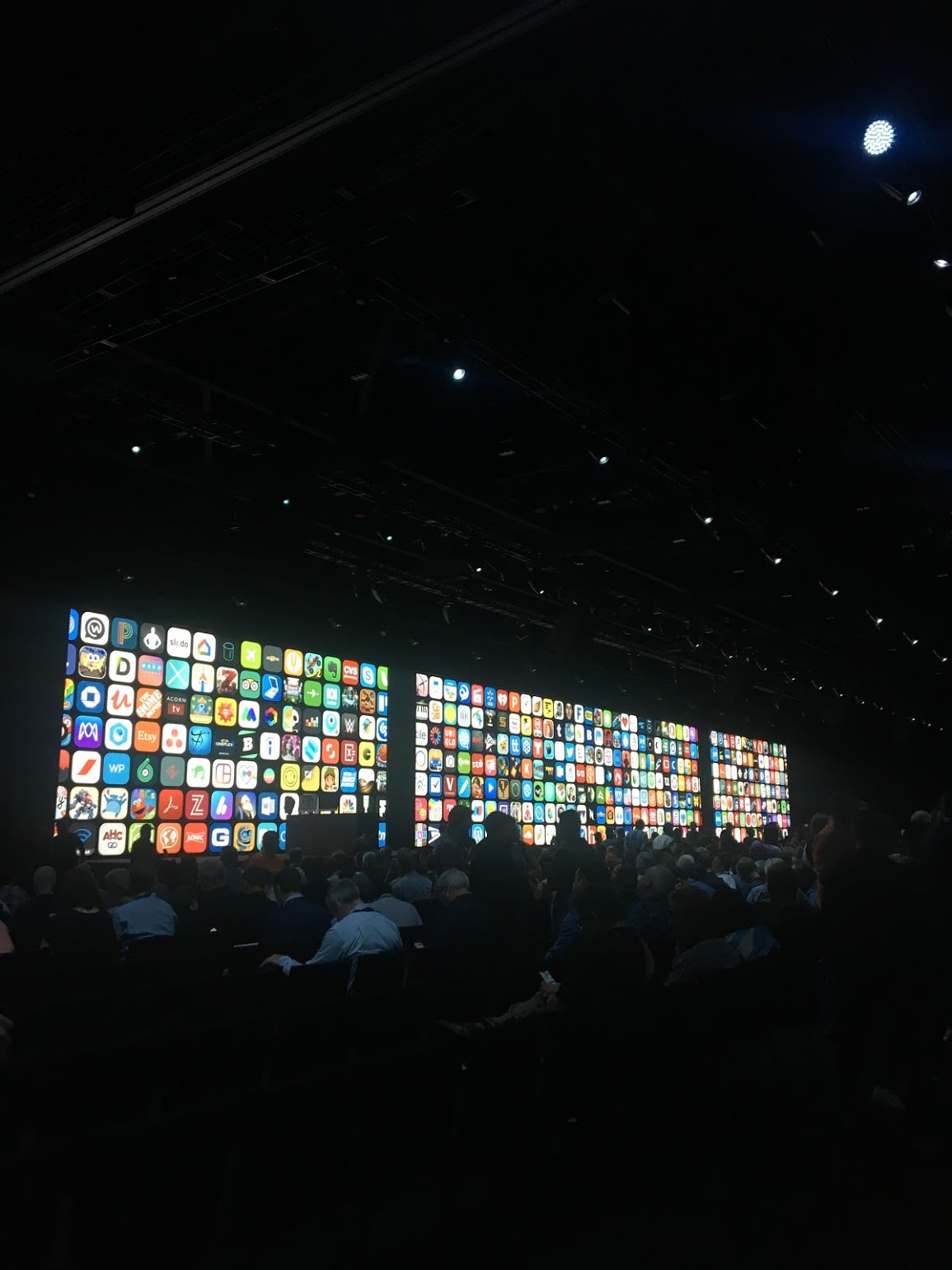 Monday was the day of the keynote, and it definitely was the most exciting. iOS 12 is blazing fast - Siri Shortcuts, Group Facetime, and Screen Time were some of the major new features. Mac OS Mojave once again was a major stability and performance upgrade. However, since WWDC is traditionally a software-driven event, Apple did not fail to impress its developers with their awesome new frameworks, including Core ML and ARKit 2 (image tracking + shared sessions in AR brings so many useful applications).

The rest of the week was filled with interesting sessions and informative labs. I had a chance to work on my Enlight app, as well as experiment with Core ML. My friends and I built a Cat-Dog Image Classifier using Create ML and the model was only 17 KB, which was crazy to think about. (Apple is using Transfer Learning, where the core NN ships with the OS) I wish I was more experienced in Apple’s development environment (React Native was my go-to until I discovered what Apple had to offer at WWDC). 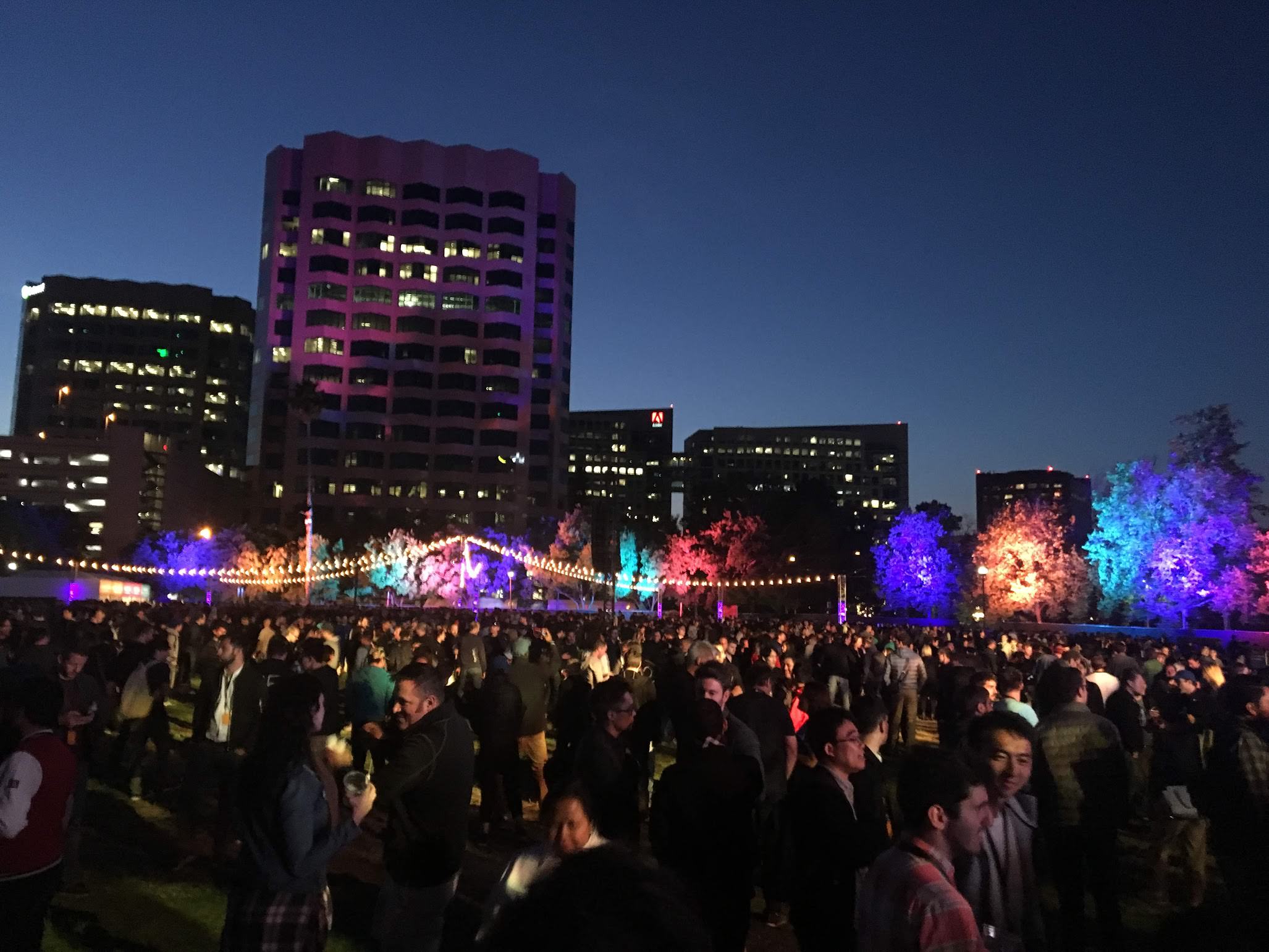 One of the highlights of the conference was definitely the bash. Panic! at the Disco tried to get the boring developer crowd we were to transform into the concert crowd, but that obviously did not happen (lol). 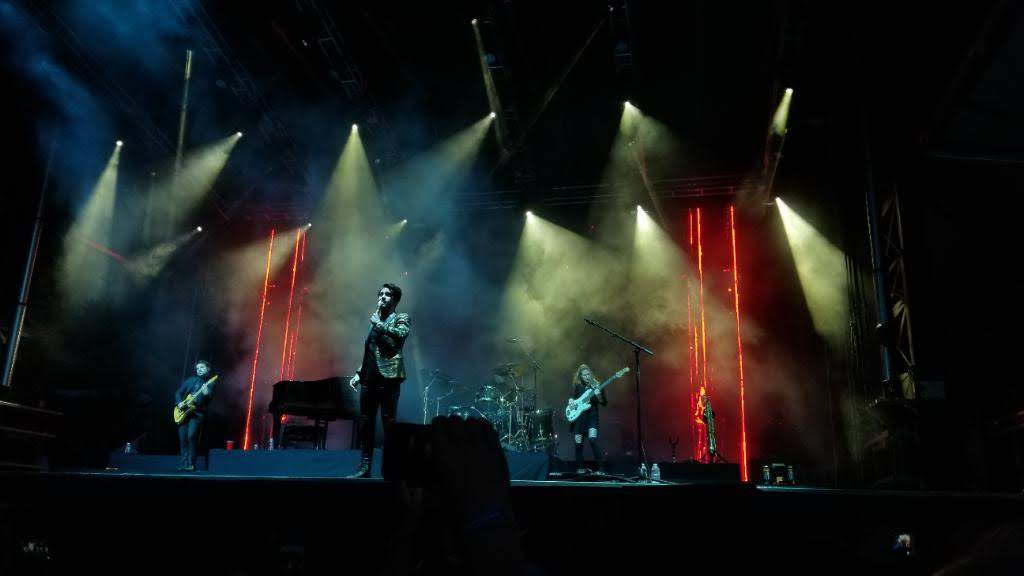 On Friday, I had the chance to meet a friend at Apple, Jay Ravaliya, and he gave my two friends and I a tour of Apple's Infinite Loop campus. I was surprised at the fact that the food was not free (unlike other tech companies), but the gelato was pretty good. During our time there, we actually said hi to Tim Isted, Apple’s Software Engineering Manager, and he immediately looked confused as he scanned to make sure there was an employee with us. It truly was a fun time. 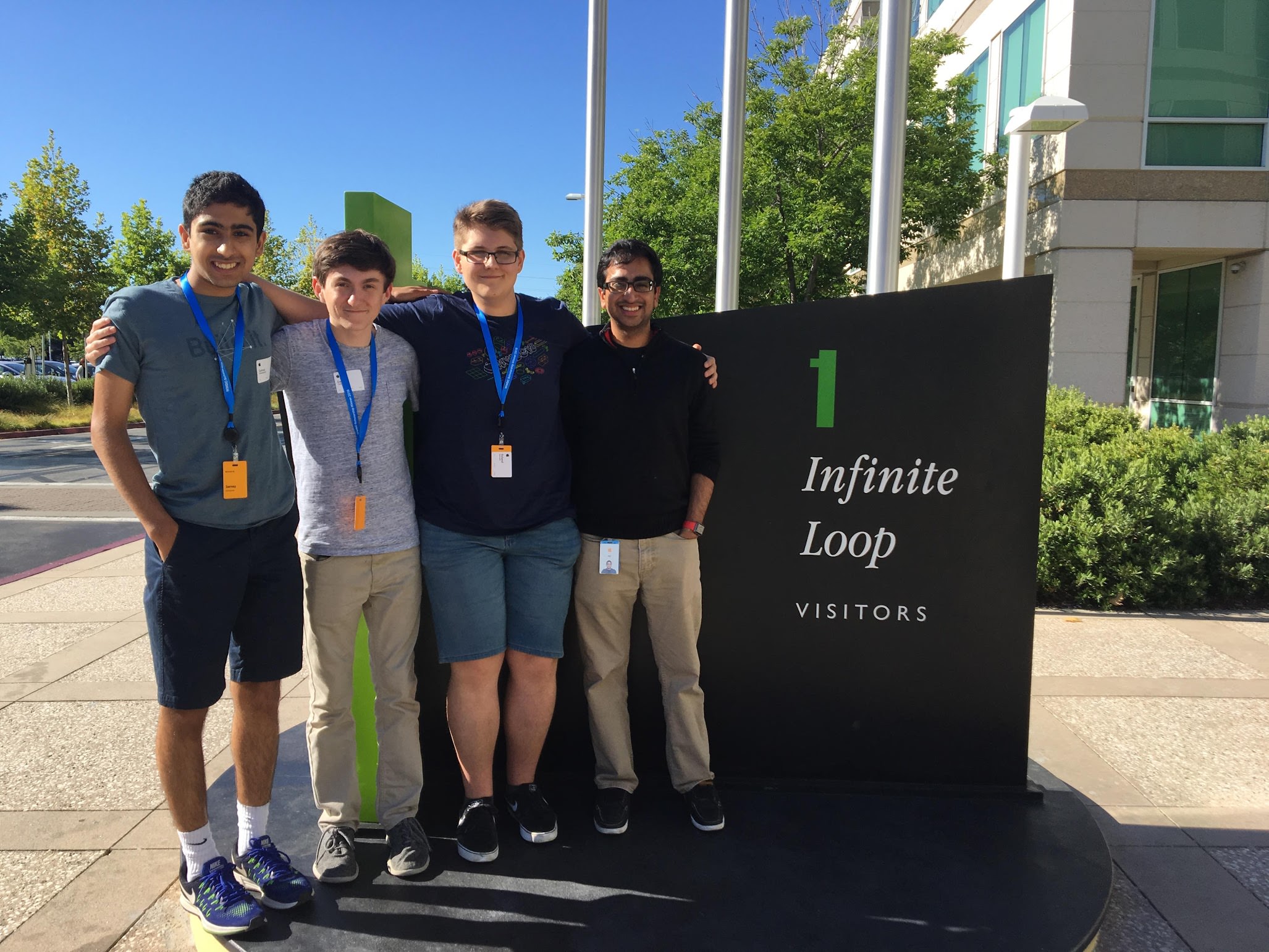 Friday was my last day as the conference had come to an end. That night, my mom flew in and we headed north to San Francisco.

Thank you, Apple. I had a great time, learned a ton, and met many creative and interesting people. 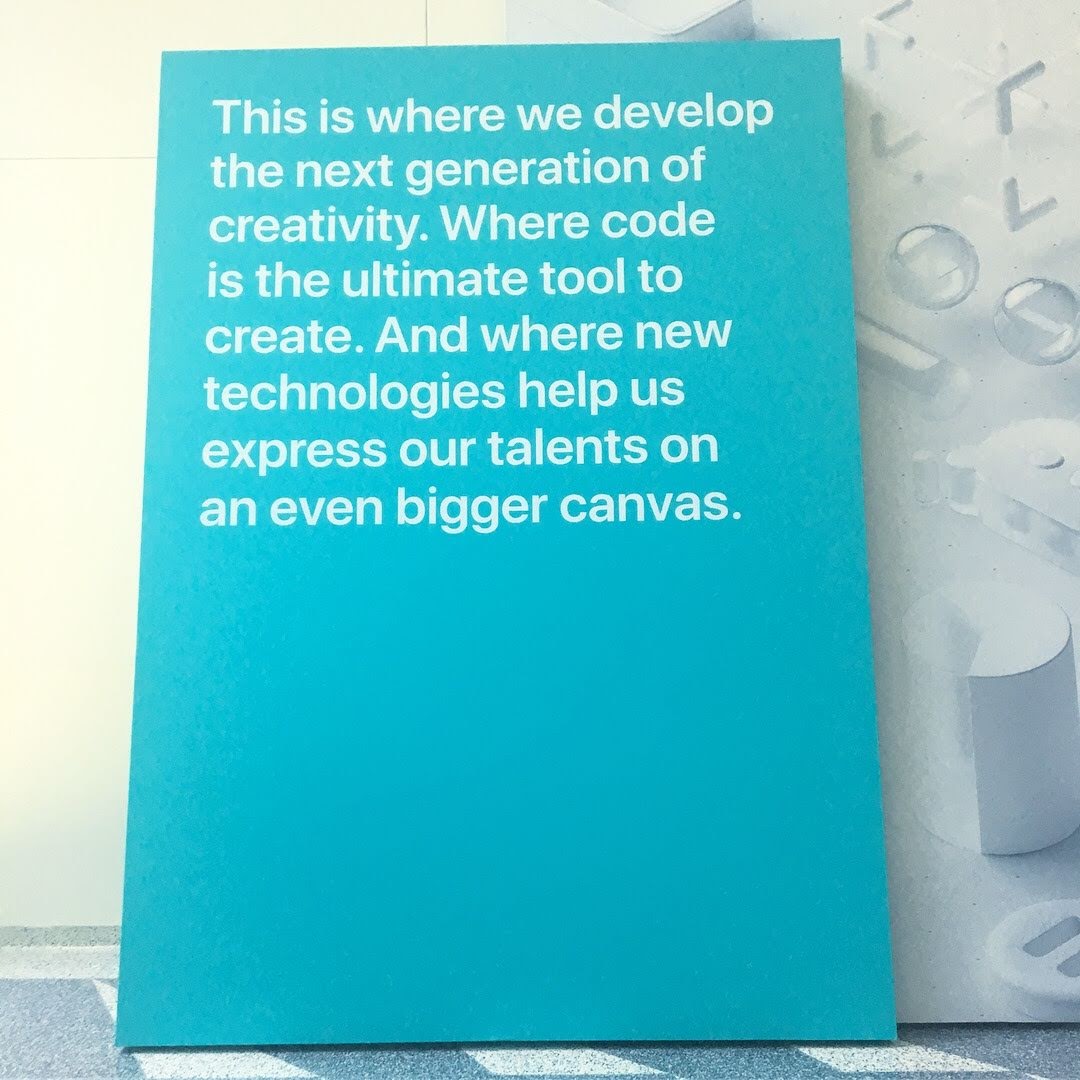 The city of VCs, tech, and Teslas

5 days had past, and I had only 5 more days in the Bay Area.

San Francisco was surprising chilly for June, but it warmed up during my stay. It’s definitely an interesting, but depressing city. My Uber driver summed it up: “If you’re not in tech, it’s impossible to live here.”

I’ve heard a lot about the crazy rents and costs of living, but for the first time I was able to experience the results of these problems. As I walked around the city, whether it be in the Mission district for dinner or the Financial district to look at all the cool tech offices, the homeless were everywhere - more than any other city I’ve visited. It’s so crazy that multi-billion dollar tech companies with missions to “advance towards the common good” don’t bother to do a thing for the people right in front of them. Well, maybe they do something - but from what I saw, it seemed like no one cared about the problem. 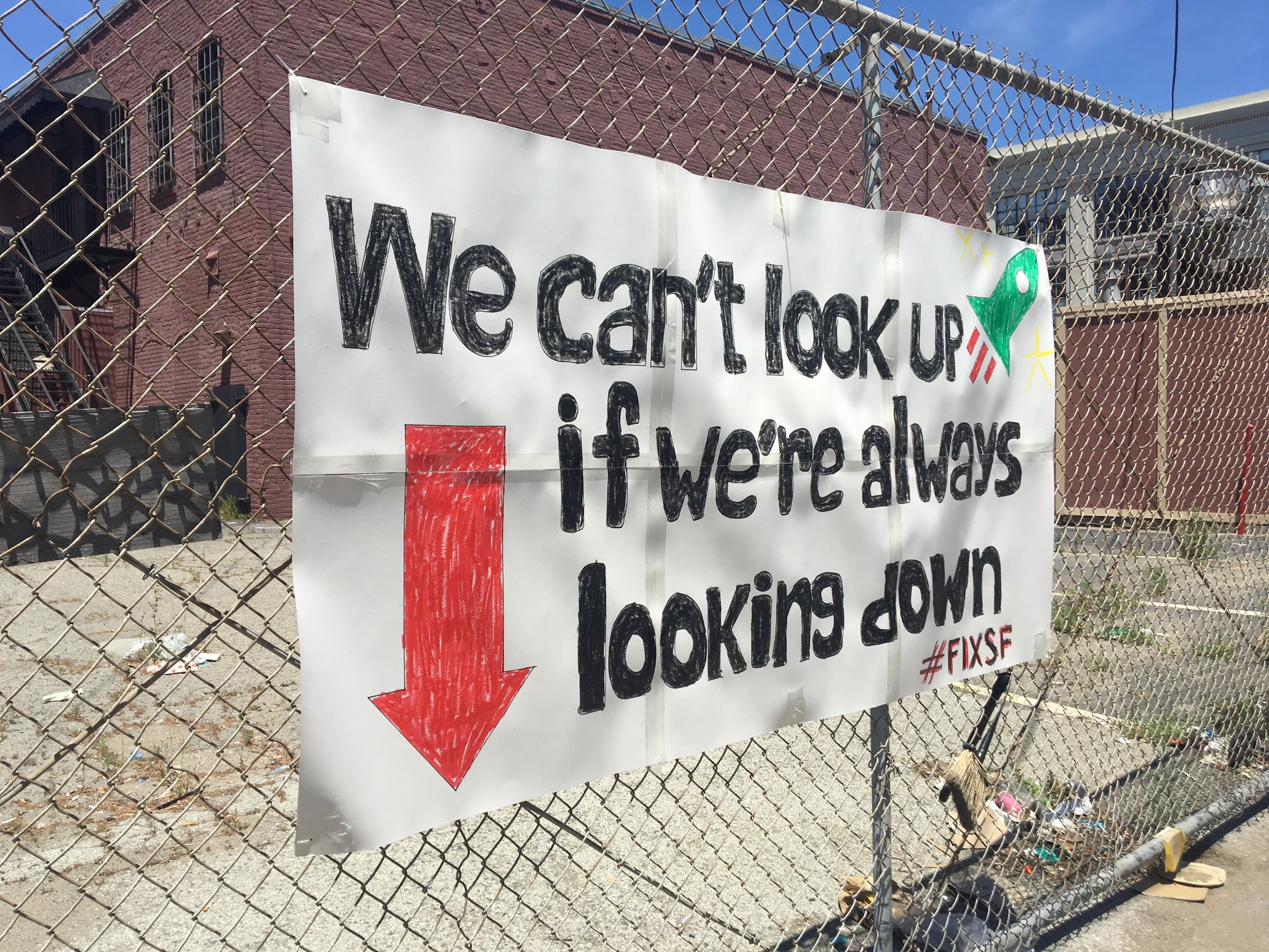 This is something that I found to be very interesting - is technology holding us back?

Anyway, in San Francisco, I did the typical tourist stuff — Golden Gate, ferry to Sausalito, Embarcadero, etc. I visited UC Berkeley, which was okay. I also went to Lyft HQ. They were in Dropbox’s old building (pre-IPO), and the open-layout of their offices portrayed an image similar to a huge collegiate hackathon. 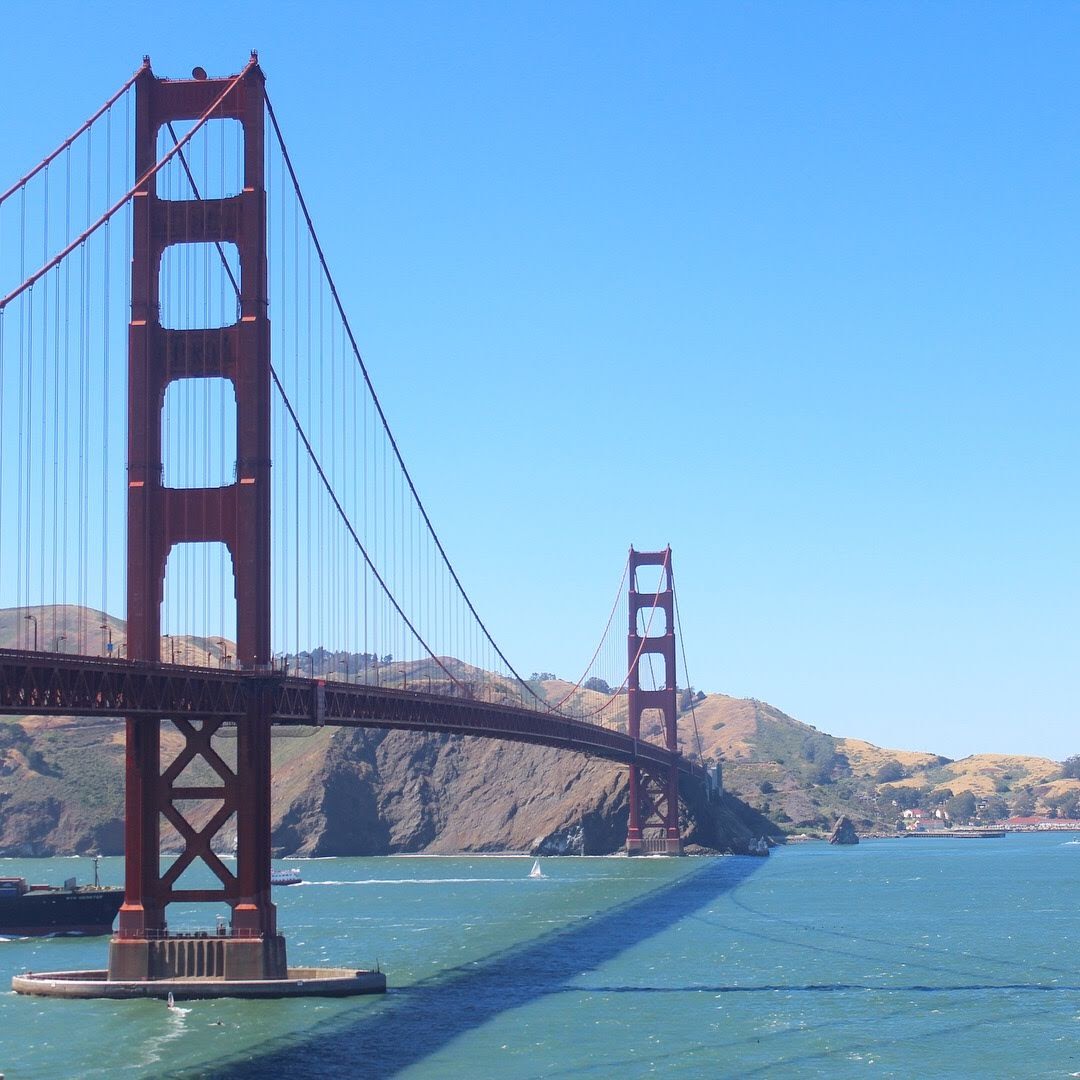 I also got to visit a WeWork in the area with my Uncle, and it was interesting to take a look at all the startups. 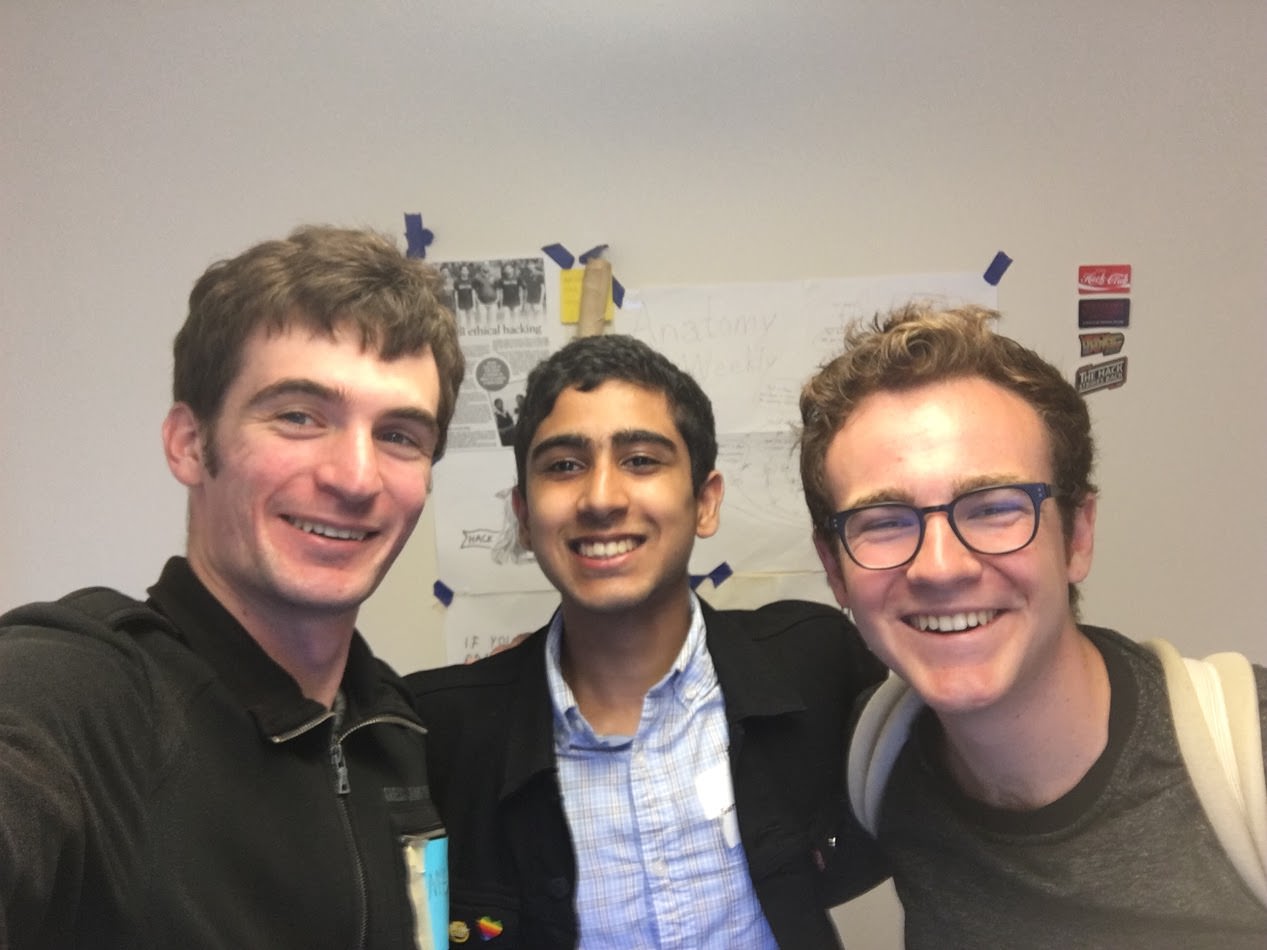 Later that day, I stopped by Hack Club HQ and met Zach and Max. It was pretty cool to connect online profile images to real people :)

On my last day (last Tuesday to be exact), my mother and I rented a car and headed back down South. We visited Stanford, which was amazing. During the campus tour, I ended up drifting off to take a look at what looked like a science fair in the quad. I then discovered that it was a poster session for the graduate class CS 231n, Convolutional Neural Networks for Visual Recognition.

Students were presenting their final projects, and they were really really impressive — some of the projects that resonated with me were image/video colorization, face feature generation, and improving image resolution. After attending that session, I think Stanford is the place for me, but of course that something for the admissions office to decide. 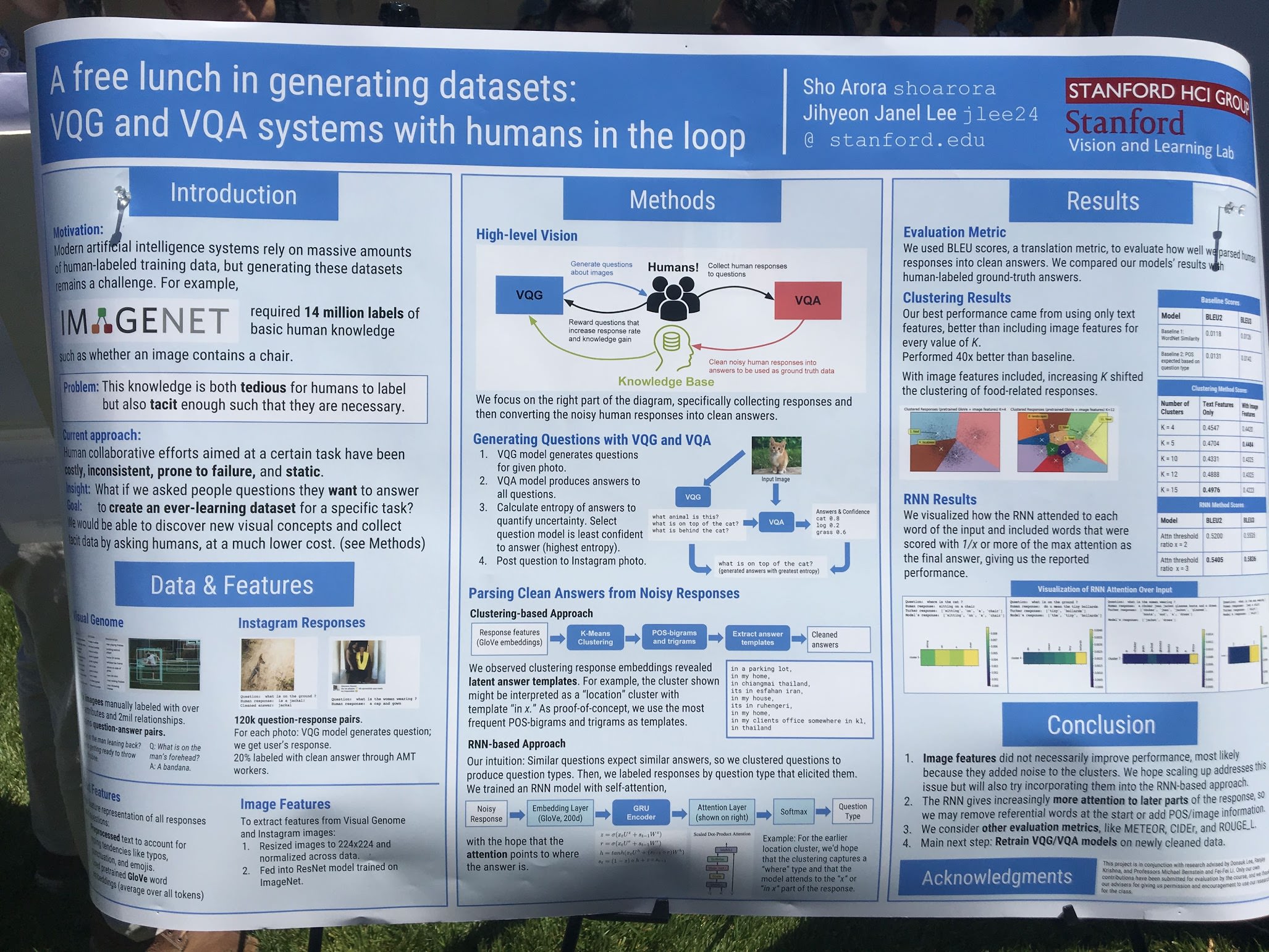 Here's a project I saw to be quite interesting. It's centered around generating datasets for ML by using human-generated responses on social media and other platforms.

After Stanford, we visited Google HQ, which was well, interesting. It isn’t as centralized as Apple Park, but it was very Google - there were bikes and engineers with propellor hats everywhere. There were basketball courts, gyms, cafeterias, and basically anything else you could think of. 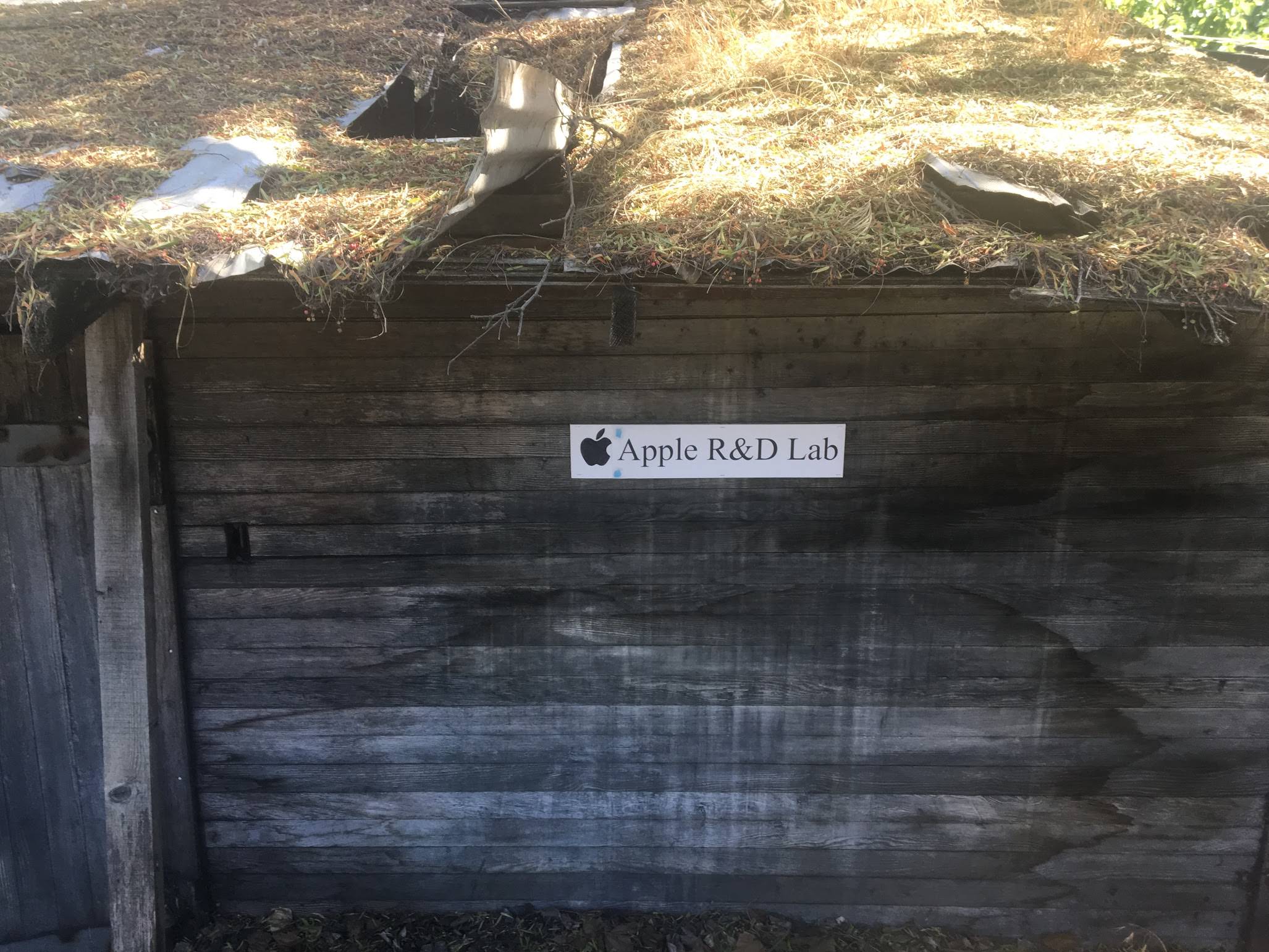 This was right outside Google HQ, which I found to be very funny. 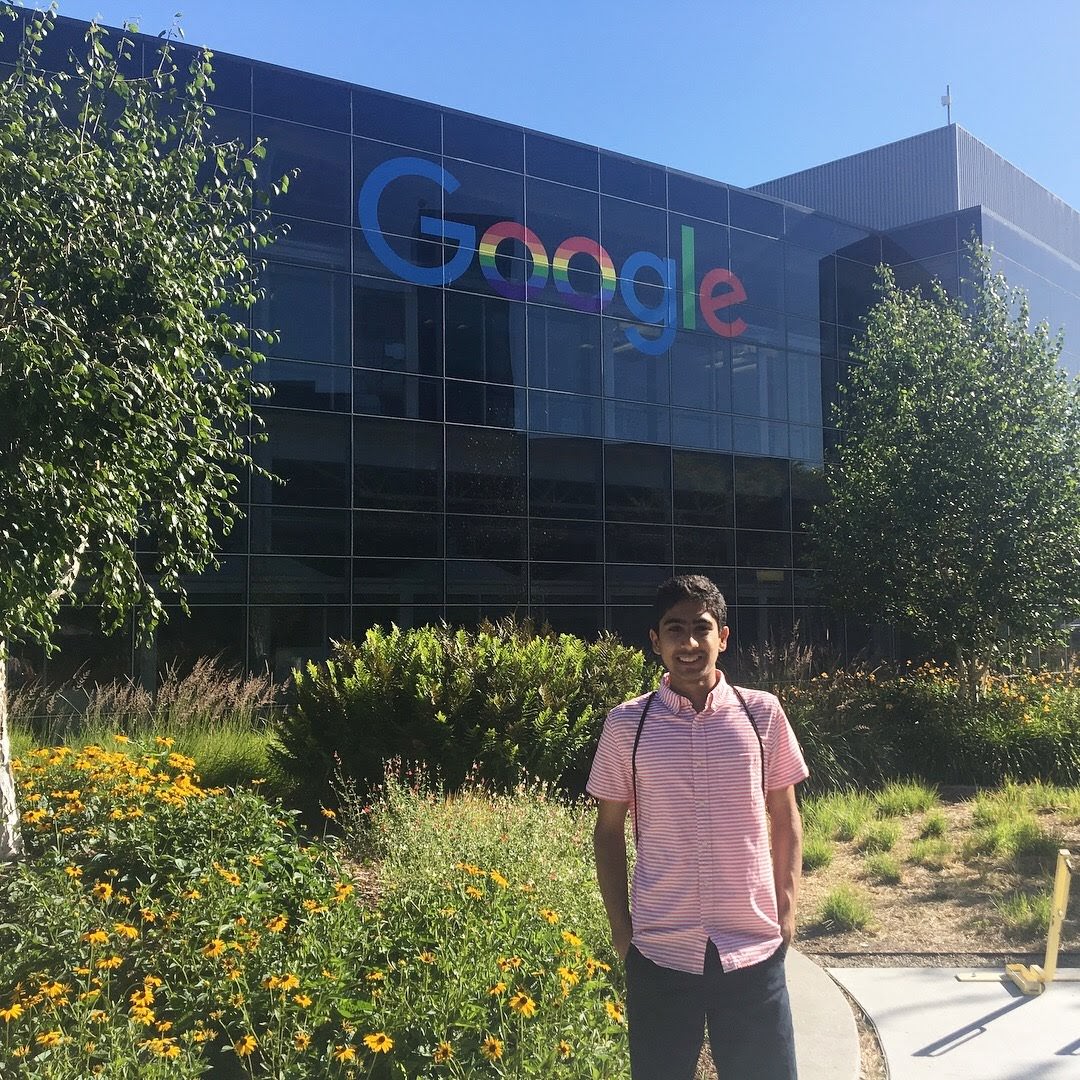 Google was amazing, but I'm not sure if I want to work there - after college, I’ll probably get a job, but then I want to take risks. I want to work on something fulfilling - something that will make a difference in the lives of others (I know everyone says this, but I swear I’m serious). If I fail, then sure, I’ll get a job - but for now, I want to pursue something more ambitious.

Well, I think that’s it. California, it’s been real. I’ll be back soon, but home is always in New York.